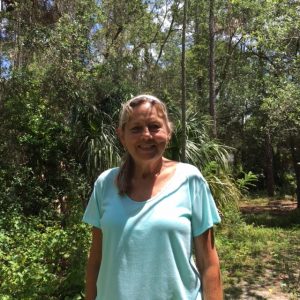 The child of two generations of farmers, Helen was raised in Bloomington, Illinois. Her grandmother set a precedent for women in the family when she went to college and graduated in 1906. Helen’s mother also went to college, became an accountant, and moved off the family farm to live in town. Helen was named after her mother’s sister Helen who died on the operating room table during thyroid surgery in 1937. “The farm was big to me” she said in describing spending summers on her grandparents’ farm.

Although Helen’s father thought she should work in a bank, Helen insisted on going to nursing school to become the first nurse in the family. After finishing two years of nursing school in Champaign, Illinois, Helen moved into a dorm in Chicago to complete her Bachelors Degree in the Science of Nursing. The school had no place for girls in the dorm so they erected a wall to segregate the men and women. Laughing, Helen recalls the wall came down the first day of school.

After graduating from nursing school, Helen married a man she knew from high school and moved to Birmingham, Michigan, then to Chicago where her husband was employed by the Chicago Art Institute. Their next move brought them to a 108 acre farm in Alfred, New York which they bought for $17,000 in 1969. Helen’s first exposure to Quakers took place in New York. Helen was raised in the Disciples of Christ Church. “I was taken with how Quakers talked and how outspoken they were.” Quakers in that area met in homes rather than in a meetinghouse.

In 1972, Helen and her husband adopted a baby girl whom they named Melissa Kerry America. Within a few years, they spent a year living in Great Britain (Wales, Scotland) while her husband completed a term as a Fulbright Scholar.

Helen enrolled in a Masters Degree in Nursing program at State University of New York Binghampton after they returned from abroad. It took her 2 hours and 45 minutes to drive one way to college for classes. She persisted and earned her Masters Degree and completed a nurse practitioner program. At this point while she was taking her daughter trick or treating, the dean of the school of nursing at Alfred interviewed her for a job. Helen was wearing a clown’s outfit when she  was interviewed for a job teaching at a school of nursing. She got the job. “That job taught me how to teach”, she explained.

Next, Helen and her husband moved to Minneapolis where she taught at a community college for a year. Then she got a job working at the University of Minnesota Hospital on a unit that was filled with AIDS patients. This was in the early days of the epidemic when the disease was not well understood. Many of the patients also had tuberculosis. Helen and many of the hospital employees tested positive for tuberculosis.

After 29 years of marriage, Helen got a divorce. Noting the weather in Minneapolis varied between -59˚ to 108˚, Helen talked to her mother about moving to Florida. “In the autumn of my life, I wanted to be outside as much as possible.” Her mother refused to move so Helen got a job in the prison, where she found many of the inmates had AIDS. Then she took a job teaching in a community college. She worked there until she retired 8 years ago.

Helen rediscovered Quakers after her mother died. (There were no Quakers in the Midwest near her.) “I felt like I dropped in on an interesting meeting”, she said after she began attending Fort Myers Monthly Meeting. “I am happy to be a Quaker.” Helen shared that being part of a spiritual formation group within the meetinghouse community has helped her.

Currently Helen is dating a physician named Bob whom she has known literally almost all of her life. They walked to kindergarten together; their great grandparents knew each other. Bob lives and practices in Bloomington, Illinois, where he is entrenched. And he visits Helen in Florida.

Helen traces her interest in Quakerism to the point in college where she began questioning her religion. “I saw that Quakers were clear about what they believed, and I found it appealing that there were no levels between a Quaker and God. It made sense to me that you have responsibility to figure out your values. I got into Quakerism late in life and have made great changes in how I live. I am so much farther along the path than I was 5 years ago.”