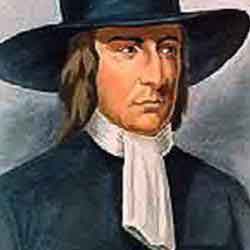 We are called Quakers or Friends and are members of the Religious Society of Friends. The Quaker movement originated in mid-seventeenth century England.

With the advent of printing, the Bible was becoming widely known, and it appeared to many who read it that the early Christian church depended very little on ecclesiastical structure, elaborate ritual and formal creeds. Indeed, it depended greatly on experiencing the Spirit in the midst of the worshiping group and on prophetic utterances inspired by the Spirit.

The Religious Society of Friends was one of the most radical new Christian sects emerging during the Reformation. Various new religious groups increasingly sought to separate themselves from the established church and from each other by shedding vestiges of religious authority, ritual, creeds, icons and symbols of the traditional Christian church.

Friends have “taken out everything except dependence on the Divine Spirit for guidance and power.”  George Fox, pictured here, is the primary architect of the Quaker movement.

“Testimonies” are what Quakers call the ways we have found to live and act based on our beliefs. Friends use the word “testimony” to describe a witness to the living truth within the human heart as it is acted out in everyday life. It is not a form of words, but a mode of life based on the conviction that there is “that of God in everyone” and that all life is interconnected.

Testimonies are not fixed dogma, but a distillation of Friends’ faith in action over the centuries.

Here is one formulation of the testimonies from the Friends General Conference. There are many other formulations of these same basic ideas from other Quaker sources.

An easy way to remember these testimonies is by the acronym “SPICES”  — simplicity, peace, integrity, community, equality, sustainability.)

The testimonies are affirmative but may sometimes lead to action that runs counter to certain practices currently accepted in the society at large. Being in community with other Quakers helps each of us as we strive to live according to these testimonies.

Discover more about the testimonies.

Learn more about the Quaker stand on conscientious objection.