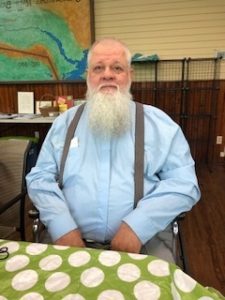 The Fort Myers Monthly Meeting grieves over the death while simultaneously celebrating the life of Larry Scott Butler, the last of our Meeting’s founding members.

Larry was born Seventh Month 29, 1943 in Clearfield, Pennsylvania. to William and Marion Butler. While in high school he was a circuit lay preacher for small family Methodist churches in the mountains. In 1965, he graduated from Dickinson College, Carlisle, Pennsylvania with a major in history. He was a founder of a liberal discussion group on campus called Concern and a founder of a Congress of Racial Equality (CORE) chapter in the town of Carlisle. His senior year he worked for the Pennsylvania State Council of Churches as a pastor in migrant labor camps where he also lived.

He became a convinced Friend and was accepted into membership by Warrington Monthly Meeting in Wellsville, Pennsylvania. After graduation he worked for the Summer Community Organization and Political Education (SCOPE) project of the Southern Christian Leadership Conference of which Dr. Martin Luther King, Jr. was president.

Bayard Rustin, noted Quaker, trained those SCOPE volunteers. Larry led a successful voting registration drive and political education campaign in Eufaula, Alabama where he was briefly jailed. He moved to Philadelphia, transferred his membership to Central Philadelphia Monthly Meeting and taught history and religion at Friends Select School from 1970-1980. He received his Master’s Degree from Temple University with attention to Quaker American history.

Larry was the first clerk of the Philadelphia Yearly Meeting’s Committee on Homosexuality which had a major impact on educating Friends on gay and lesbian issues. The organization later evolved into Friends for Lesbian, Gay, Bi-sexual, Transgender and Queer Concerns. With a small group of other Quakers he was a founding member of Unami Monthly Meeting in Pennsburg, Pennsylvania.

In 1980, Larry moved to Florida and lived on a boat for a number of years. He became a member of Miami Monthly Meeting. In 198, he began working with the developmentally disabled and helped start a horticultural vocational training program in Miami Beach called The Log Cabin Plant Nursery. In 1986, he moved to Fort Myers, Florida and co-founded the Fort Myers Monthly Meeting. He continued his work with the developmentally disabled, concentrating on men with low IQ and issues of violence.

In recent years, Larry was beset by various health concerns, including the amputation of one leg. These health challenges never stopped his commitment to life in its fullest. He continued until his death to be the primary caregiver to a beloved developmentally disabled housemate. Larry remained a vibrant part of the life of the Fort Myers Meeting, serving on a Clearness Committee only weeks prior to his passing, and often sharing in vocal ministry at our meetings for worship.

In his last years, Larry worked to organize and document the books and papers he accumulated during a life active in Quaker issues, and these contributions have now been accepted into the Quaker Historical Library of Swarthmore (in Philadelphia) in a special collection named for him, where they will be permanently available to scholars of Quaker history.

Larry passed away on December 15, 2018. He is survived by his partner of many years, Wandson D. DeOliveira and Wandson’s children, Priscilla and Samuel, whom Larry helped to raise. He had two brothers who died before him, and is survived by two sisters, Susie Barley and Diane Butler.