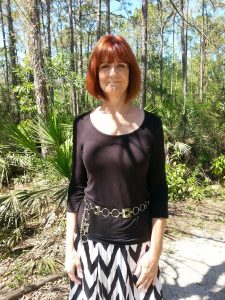 Rabbits and rats shared Nancy’s childhood home on the weekends. Nancy was born in Washington DC where her father worked for the Food and Drug Administration until he got a job as a chemist for DuPont and moved to Delaware. Nancy’s father brought laboratory animals home for visits on the weekend as a way to enrich his family’s life. She was raised as a Catholic.

One of four sisters, Nancy spent her middle and high school years in Delaware, and then entered University of Delaware. She got married in June at age 19 while in college. Her husband Todd was stationed with the Navy in Rhode Island, so she transferred to Rhode Island College to complete her undergraduate work. Her husband left in November for 7 months at sea. Nancy found herself in college, married, and without many friends except for the professors.

When told about her marriage plans, her father asked her to promise to finish college, which she did. Nancy majored in English and minored in Education, combining her two major loves: writing and children. A difficult experience as a student teacher made Nancy leery of getting a job as a teacher. She was placed in an urban school that employed armed guards and was populated with many students who were taking drugs; overdoses were common.

After Nancy’s husband finished his service in Rhode Island, they returned to Delaware. Nancy’s first job after graduation involved selling nuts and bolts in a territory from Wilmington to Baltimore. She found that she missed kids and decided to apply for a job in a private school. Nancy taught in two private schools in Delaware and returned to the University of Delaware for her Master’s degree. She said her claim to fame is that Joe Biden lived next door to one of the schools and Dr. Oz spoke at the graduation of the second school. It was common to see Joe Biden in Wilmington; Nancy recalls speaking to him while on line in a restaurant.  They discussed a current issue which was occurring in the government.

Nancy changed schools after going through a difficult year in which her husband and she lost 3 parents in 6 months.

An aunt who was a nun was Nancy’s first spiritual guide. Nancy remembers her Aunt Bobby speaking to her at a very early age when she was struggling with the idea of eternal life, and she continued to support Nancy as she explored other religions. “Quakerism would be a perfect faith for you; I can see you as a Quaker”, her aunt told her.

As a member of a book club in the mid 80’s Nancy encountered Quakers for the first time. The Quakers were teachers at a Quaker school in Wilmington. Although the group did not last long, the impression Nancy developed of Quakers was long-lasting. She began attending meeting for worship in Wilmington where there were 3 Quaker meetings at least 200 years old within 10 miles of each other. Nancy attended meeting for worship in an old building with no heat – it housed an eclectic group of people. She felt she had found her home.

When Nancy realized her lupus was sapping her energy and causing her pain, she knew she had to take an early retirement. Her husband loved the water and wanted to live in the Florida Keys. Nancy preferred Santa Fe but compromised on Florida provided she could find an unprogrammed Quaker Meeting. (Fort Myers Monthly Meeting fit the bill.) They bought a house on Marco Island before they both retired and found it to be a natural transition to Florida living when they were ready to move from Delaware. They have been full time in Florida for 12 years.

Nancy’s husband spends his time working on their house and boat and volunteering at a car museum.

Nancy is a volunteer guardian ad litem, a position she assumed as a result of a suggestion by dear Friend. The advice felt like a leading. She works with the court system and children who are removed from their homes by the state. She is the voice of the children in court; she goes to physical therapy and doctors’ appointments, mentors other guardians, and works with the parents. The experience can be “heart wrenching”. Nancy says it is “heart work, not hard work”. In addition, Nancy enjoys writing and has written poems, short stories and novels.

For Nancy, the Quaker testimonies are wonderfully intertwined, “like holistic medicine”. She finds integrity to be the guide for everything else. Be true to the light within and simplicity, peace – all the testimonies – will find their place in living as a Friend.