You are here: Home / Profile / Karen 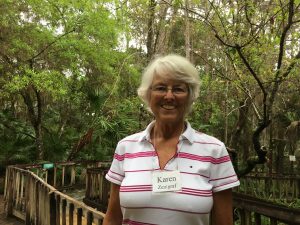 Lazy summer days floating down a salt water creek – Karen lights up when she remembers the idyllic summers spent at her mother’s family’s home. She grew up on Long Island where her family lived in the winter in Syosset and in the summer in a cottage on Centre Island/Oyster Bay on the north shore of Long Island. “Summers were great! We had a cottage on the creek. We were fast swimmers when we swam with the tide.   My grandmother used to have float parties where a group of family and friends used inner tubes to float with the tide.”

Karen’s father was an attorney who worked in banking law in Brooklyn. Her mother had lived abroad, and attended 13 schools before she enrolled in junior college. Karen’s mother spoke German and French. Karen’s paternal grandparents lived in Glen Cove on a farm. After they died, Karen’s parents moved into this house. When Karen’s parents died, Karen’s sister and brother had to dispose of 6 generations of possessions stored in the house. They sold off the land and the house, the end of an era.

When Karen was in 7th grade, her family moved from Syosset to Locust Valley. There Karen attended the Locust Valley Friends Academy. Karen knew her family were careful with their finances so she and her siblings could attend Friends Academy. Karen’s father and all his family were Quakers. She recalls her great grandmother sewing white nighties for the Friends Service Committee to be given to infants of displaced people from the war.

In contrast to the Quaker background of Karen’s father, Karen’s mother and her mother’s family were Christian Scientists. Her parents agreed their children would be exposed to both religions. Karen went every other month to Matinecock Friends Meeting for Worship and alternate months to the Christian Science Sunday School. In college (Vassar College) Karen realized she was trying hard to follow the beliefs of the Christian Scientists, but she could not accept them. Her thinking crystallized further when she wrote a paper on Quaker education for a senior year philosophy of education course. She learned more about Quaker beliefs and the importance of educating spirit, mind and body.

Karen and Hank met in Poughkeepsie, New York while he was working for IBM. The summer between Karen’s sophomore and junior college years, she participated in the “Experiment in International Living”. She lived and traveled in Germany with a German family. Hank participated in the “Experiments” Program by being a community ambassador to Chile. After completing their programs, Karen and Hank met by sharing a ride to an alumni meeting in Putney, Vermont. Hank volunteered to give Karen, who had no car, a ride to the meeting.  As they became better acquainted they discovered their mutual interest in swimming which strengthened their bonds. Hank and Karen had swimming dates in the Vassar College pool, generally followed by dinner.  They discussed religion as their relationship deepened. Hank had been raised Catholic. When they discussed marriage, there was a concern that the Church would require her to become Catholic and raise the children in the Catholic Church.   Karen and Hank were fortunate to find a priest who could handle their differences; the priest even advised Hank to find out more about Quakers and told him it was his responsibility to support Karen in her spiritual development.

Karen completed her degree in German at Vassar College and moved to Iowa for two years, where she taught German at the Scattergood School in West Branch. “It was a Peace Corps-like experience”, she explained. “The students, as well as the faculty were active in the upkeep and maintenance of the school, as well as the kitchen, (cooking, serving, and cleaning up meals), housekeeping (cleaning, laundry, painting, minor repairs and plumbing) and farm chores.  They milked the cows, collected the eggs and each sophomore raised a sow, attended her farrowing, and raised her piglets.”  While at Scattergood and during the summers, Karen also continued studying for her masters from Middlebury College German School as well as completing requirements for teacher certification.

After completing her masters, Karen and Hank were married in New York. Seven months after their wedding Hank transferred with IBM to Boulder, Colorado. When they first married, they attended both the Boulder Meeting for Worship and the Catholic Church. Hank fell away from the Catholic Church shortly thereafter.  They were involved with the Meeting, especially through their contact with the Carter family, whom the Meeting helped by sponsoring school lunches for them, while the Carter children integrated the schools in Drew, Mississippi.  The family visited the Carter family in Drew and had two of the Carter girls spend two summers with them in Boulder.  (For more information about the Carter family, read Silver Rights by Connie Curry.)

As their children grew, Hank and Karen realized the Quaker Meeting was not the best fit for their children at their ages, so they began attending the United Church of Christ. They have three daughters. One lives in Fort Collins, CO and the other two live in Austin.  Two grandchildren live in Austin and one in Colorado. When Karen and Hank’s Colorado daughter became ill, it was evident that it would help her daughter, son-in-law and granddaughter if Hank and Karen moved closer. Downsizing from two and a half acres to a small city lot in Fort Collins sweetened the deal.  Living in Boulder for four decades had been rewarding. Karen had enjoyed teaching English to women from other countries. But then the school administration where she taught insisted they wanted to have only Christian teachers. Karen and quite a few teachers resigned in protest and started their own school happily teaching English as a second language. Karen also taught swimming, lifesaving, babysitting and CPR at a local YMCA.  But the move to Ft. Collins has brought new activities as well as an annual move to warmer climes in the winter.  Here, too, they are finding new activities.

Karen and Hank have been married for 50 years as of October 2015. It is clear Karen lives her Quaker values. She is drawn to the concept of that of God in each person, and the concept of letting your life display your values. Before leaving for summer in Colorado, they will travel to Haiti in conjunction with Hope for Haiti. They have been doing volunteer work for this organization for a while and now have the opportunity to see the results of their work.